When the cores are collected offshore, they come up in clear plastic liners which are then divided into a maximum length of 1.5 meters. Those liners are sealed and labelled and then put into a cold dark container. On Mission Specific Platform expeditions the cores are split onshore. They are returned to the IODP Bremen Core Repository for full analysis. The first stage is splitting the cores open – so how do you split a core?

The core splitting is done in the workshop area at the MARUM – Center for Marine Environmental Sciences at the University of Bremen (Germany). It’s a workshop so the odd splashes of water or mud won’t matter!

The core is placed into the splitter, held in a metal trough, with the steadying hand of one of the wonderful student helpers. Ngozi, Sipan, Rezan and Johann ensure over two shifts that the core splitter is working from 7.30 am to 10.30 pm.

As the circular saw blade whirrs into life, it is slowly pulled along the length of the core, making a vertical cut through the plastic liner and core material. Once completed, a sharp knife is run down that cut making sure there are no plastic liner bits still holding it together. After that it is opened and the split core faces are washed with cold water. This removes any mud smears that have been left as the blade passes through. By the way: We are halfway through the core splitting at the onshore science party and now on our second blade.

One core half is designated as an archive half, which means it gets preserved as it is a part of the IODP legacy. Only non-destructive measurements can be performed on this such as digital line scanning and core description. The other half is the designated working half, and this is the one from which all the research samples are taken, as well as any measurements that might damage the core. The cores are loaded onto a trolley and taken to the waiting scientists who are eager to see what story each section will tell them.

How do you…? Whilst the OSP is running we will post a series of blog entries, focussing on the different steps involved in processing and sampling the cores to IODP standards.

A Diamond blade cuts the core. 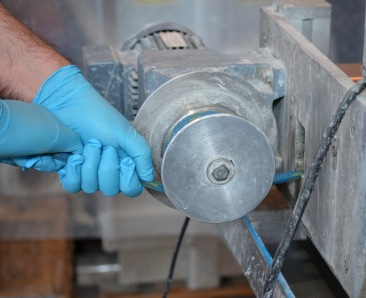 Control of the saw via rope.